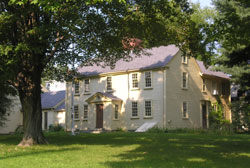 Arlington’s proximity to Boston and all commuter Routes makes it a very desirable place to live.

Arlington is bounded on the south by Route 2, a major transportation route allowing access to Boston and the western part of Massachusetts. Arlington is also a short distance from Interstate 93 and 95. Other major routes that go through the town are Routes 2A and 3. Public transportation is provided through the Massachusetts Bay Transit Authority (MBTA) servicing the Greater Boston area with bus service and a subway system. Closest access to the subway system is through the Alewife Station located just over the Arlington border in Cambridge.

Several important bus routes go through Arlington; they take you to Alewife Station, Harvard Square, Davis Square, Lechmere Station, and the Burlington Mall. The fare is 90 cents. Special fares are available for seniors (65+) and persons with disabilities. Children under 11 ride free. You can find fare information and interactive maps on the Massachusetts Bay Transportation Authority (MBTA) website.

"I liked working with Bill Copithorne.  He knows his business,educated me enough in his business so that I understood what he was going to do & why, he speaks plainly and directly and most [...]

"Bill Copithorne worked for me as a real estate agent on one house purchase and one condo sale. He was very good to work with and produced the results we were seeking without being too aggressive and [...]

Kate Moscatel is truly passionate and realistic about her work as a real estate professional. She treats every aspect of a transaction as if it were her own property yet listens to and respects her [...]

"I have used Bill Copithorne's office to look at homes, buy a house and sell a house.  This has been a succesfull business relationship over the years.

"Bill Copithorne was a fantastic buyers agent for me.  He helped me find a place I am still happily living in and even negotiated for me a great price (better than I thought I could get). He is very [...]

We are writing to express our pleasure with real estate broker, William Copithorne of Sweeney & O’Connell Real Estate, who represented us in our recent purchase of a single-family home. Bill [...]

Bill has gone over and above what a broker would typically do. I will continue to use Bill on all my Arlington properties. Bill is one of the best brokers i have worked with.     [...]

Bill Copithorne with Sweeney & O'Connell Real Estate made what could have been a difficult process almost easy.  His responsiveness, attention to detail, and patience was impressive.  He always made [...]

It was suggested to me by my P&C Agent to use Bill Copithorne to sell my family home/ rental property in Arlington. Bill was very professional and easy to work with.during the process. We discovered [...]